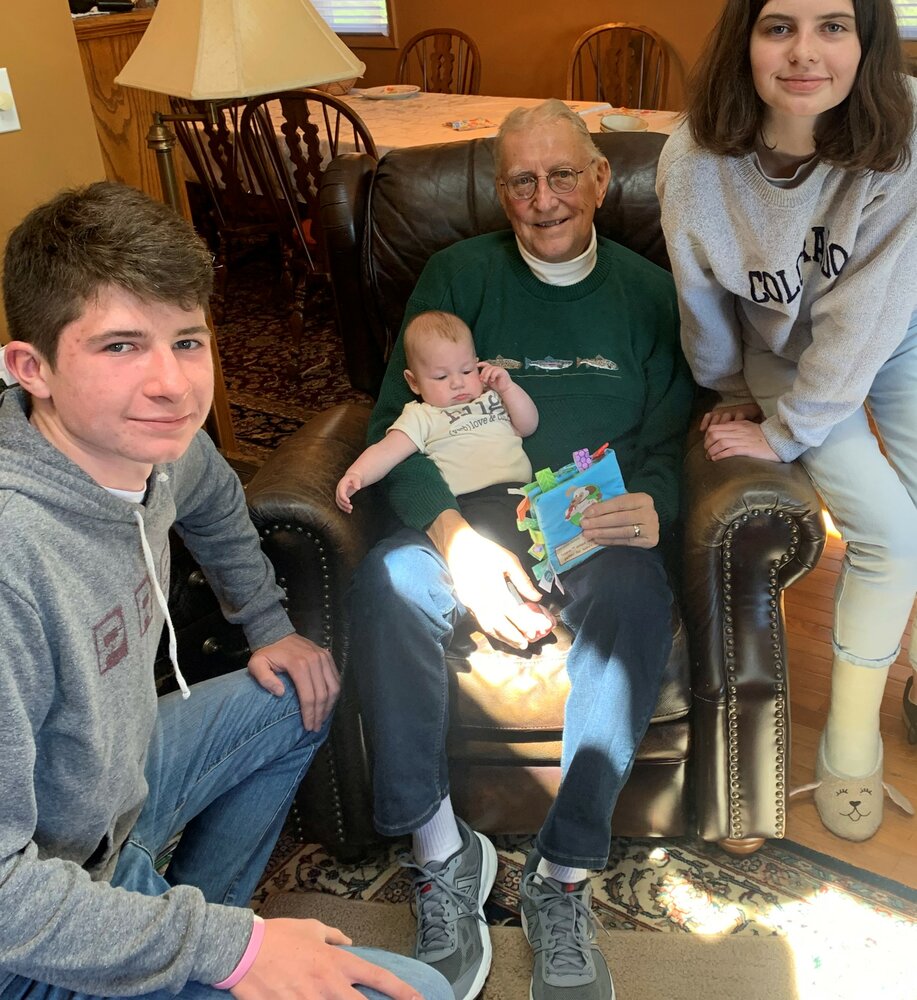 Ron passed away on December 12th following a year and a half battle with Acute Myeloid Leukemia, he was 79 years old.   Ron was defined by his Pittsburgh roots, his time serving in the US Air Force, successful career at Warner-Lambert, as well as his gift of gab and love of his family and friends.

After graduating high school, Ron joined the US Air force, where he was stationed in Greenland and proudly served in the air police.  He also hosted a GI radio show to keep the troops entertained, and tracked Santa from his post every Christmas Eve.

It was in Pittsburgh where Ron met his loving wife of 53 years Barbara after having been set up on a blind date.  They got married in Pittsburgh and moved through several states before settling in Sparta, New Jersey to raise their two children, Julie and Greg.

Although he traveled to many beautiful places throughout the country, there was none more beautiful to him than Cochranton, PA where as a 12 year old boy, he built a cottage together with his parents (the late Ed and Helen Demczak) on the banks of French Creek.   After Julie and Greg came along, every summer vacation was spent there with extended family.  At times there were ~15 people staying in the two bedroom cottage swimming, fishing, and relaxing.  He was able to bring all three of his grandchildren to the cottage this past summer.

Ron had a 40 year career at The Warner-Lambert Company, he started as a retail sales rep and moved his way up to eventually become the VP of Corporate Trade Relations, the position from which he retired in 2000.  He was so proud that his two children followed in his footsteps to the Healthcare / Pharmaceutical industry with Julie at Pfizer for 26 years, and Greg at AbbVie and other healthcare companies for 20 years.

Holiday gatherings with his kids and grandkids were among his favorite time.  He loved son in law Terry’s homemade pizza and talking about football and golf, and greatly enjoyed wine tastings with his daughter in law Alizah (who always indulged his fondness for boxed wine).   His grandkids were his greatest pride and joy.  He would talk Steelers vs Giants with his grandson Connor, and would attempt to discuss the finer points of art with his granddaughter Amanda.  Most recently, it was visiting with his new grandson Max, who brought such joy with his mischievous antics and affectionate personality.

Even after receiving the terrible diagnosis of Acute Myeloid Leukemia, he kept his spirits high and was determined to maintain all of the activities that he loved in his town of Milford, PA.  These included daily phone calls with his dear friend Dennis, routine trips to the gym and outdoor walks with his Covid Crew, frequent visits to Turkey Hill and Key Foods to check in with all of his friends there, and dinners at the Dimmick Inn and other local restaurants.  He also felt so fortunate to call Raspberry Ridge home for the last 16 years with its community of wonderful neighbors and breath taking views of the Delaware.

We feel tremendous gratitude to his beloved town of Milford and all of his wonderful friends.

We would like to specifically thank Dr. May and her team for their compassion and personal approach throughout his Cancer journey.

In lieu of flowers, donations can be made in Ron’s name to the following organizations both of which he was passionate about: French Creek Valley Conservancy(www.frenchcreekconservancy.org) or Alzheimer’s Drug Discovery Foundation (www.alzdiscovery.org).

Share Your Memory of
Ronald
Upload Your Memory View All Memories
Be the first to upload a memory!
Share A Memory