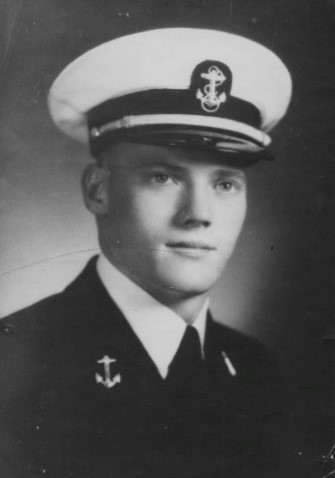 Arthur K. Ridley, one of the few remaining “true natives” of Milford, died on March 5th, 2021, after a short illness. He was 86 years old. We take comfort in knowing that he joyfully entered heaven to be with the God he served throughout his life and to be reunited with his beloved son, Kenny, whom he carried in his heart since his death as a 6-year-old boy. We will miss him.

Art was born on March 16, 1934 in Milford, the 5th of 10 children born to Mr. and Mrs. Walter Ridley. He graduated from Milford High School in 1952, where he excelled both academically and athletically. After finishing high school, Art attended the United States Naval Academy, graduating in 1958. His time at the Naval Academy shaped every area of his life and set the foundation for a life focused on serving God and people. He was proud to be the Company Commander of 4th Company and cherished every moment that he spent as a Midshipman. The relationships and bonds formed during his time there lasted a lifetime and his daughters were able to attend his 60th reunion in 2018 and revel in these relationships along with him. It was a blessed time. The Naval Academy remained one of his favorite places on earth, a fact borne out by his many visits to the Academy throughout his life and the number of Naval Academy t-shirts and sweatshirts that can be found in the wardrobes of all of his family members. His family knew never to bother him during the Army/Navy game!

Art married Jane Hamilton in 1959 after becoming acquainted with the beautiful “city girl” from New Jersey on one of her many visits to the Hamilton family summer home. They had two daughters while Art was stationed at Fort Lee in Virginia, Jennifer Jane, in 1960, and Jacqueline Jill, in 1961. He served in Vietnam from 1962 to 1963 and, after leaving the service, moved to New Jersey where he worked full-time with Public Service and attended Fordham Law School at night. While in New Jersey, his son Arthur Kenneth Ridley, Jr. was born. After graduating from Fordham Law School, Art was invited to return to his hometown of Milford to practice law with Attorney Sidney Krawitz. At the time of his final illness, he was of counsel to Ridley, Chuff, Kosierowski and Scanlon, P.C.

Art was actively involved in the community throughout his life, serving on the boards of the Biondo Memorial Foundation, the Pike County Library, the Milford-Matamoras Rotary Club, and the Community House. The last surviving founding member of the Milford-Matamoras Rotary Club, he actively supported their many service projects and loved the idea of serving people around the world. As a young man, he credited the Milford United Methodist Church with pointing him to God and nurturing his faith. More recently, he was an active member of the Dingman’s Ferry United Methodist Church, frequently acting as a lay preacher. Art and Jane hosted a Bible Study in their home for over 30 years. He loved teaching and discussing the word of God. Art gave all the glory for every good thing in his life to God and quietly served other people throughout his life. Mindful of the needs of others and desirous of being a blessing, he generously gave of his time, talents, and treasure.

Art loved running and completed marathons in New York, Washington, and Disney World. His lifelong participation in both running and community service lead the Milford-Matamoras Rotary to establish the “Ridley Run,” used to raise funds for several local charities. He was passionate about gardening and reveled in the miracle of planting things and watching them grow. An avid reader, he enjoyed both watching and playing a variety of sports and watching Jeopardy. He could often be found doing crossword puzzles, having tea with his daughters, dragging his grandchildren up the hill to the Knob and breathing in the beauty of creation.

Art is survived by his wife of 61 years, Jane Hamilton Ridley, daughters Jennifer Case and Jill Mann; sons-in-law Michael Case and Anthony Mann; grandchildren; Kayla O’Brien and husband Mark, Kevin Mann and wife Jenna, Jane Case, Alexandra Case, and Emilie Case; great-grandsons Trevor O’Brien, Brody O’Brien, Marcus O’Brien, and Landon Mann; brothers Robert, Richard and Floyd Ridley, sisters, Gertrude Smith, and Patricia Taylor; brother-in-law John Hamilton and wife Joan, and numerous nieces, nephews. We are grateful for his presence in our lives, for his hard work and dedication to everything that he did, and for the way he always pointed us to Jesus as our true hope.

Art’s family is grateful for the quick action of the Dingman Township Ambulance, the staff at Newton Hospital and the wonderful nurses and doctors at Overlook Hospital’s Neuro-Intensive Care Unit who did all they could to restore Art to health. They gave us several extra and precious weeks to be in Art’s presence and let him know how very much he was loved. For those who wish to make a donation in memory of Art, contributions may be sent to the organizations listed above or to the charity of your choice.

Visitation will take place at the Stroyan Funeral Home, 405 West Harford St., Milford, Pa on Thursday, March 11, 2021 from 2 to 5 PM. Covid protocols will be followed. Funeral services will be held privately for family only at the Dingmans Ferry United Methodist Church, Dingmans Ferry, PA on Friday, March 12, 2021 at 10 AM. Friends may view services through the following link (https://www.youtube.com/embed/nGeh2-EL1_Q).

Share Your Memory of
Arthur
Upload Your Memory View All Memories
Be the first to upload a memory!
Share A Memory