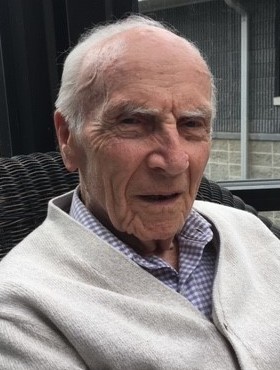 Raymond F Smith, Sr, passed away on Monday, April 20, 2020 at 97 years old. He was born in New York City on December 13, 1922 and grew up in the Bronx, NY. He was the son of Eugene and Margaret Smith and older brother of Eugene Philip Smith. Ray met Alice Sheldon, they married and moved to Rockaway, NJ. He was a veteran who served in the Army Air Corps in WWII. Ray earned a bachelor’s degree in Finance from NYU, while working at the Federal Reserve Bank. After moving to NJ, he worked at Picatinny Arsenal in Dover. Upon retirement, he and Alice moved to Newton, NJ. They were married for 69 years and their love and devotion to each other was an inspiration to all who knew them. They were inseparable and always holding hands. Ray was known for his sense of humor, his wonderful voice, and gliding across the dance floor with Alice. He is survived by his five children: Nancy Motyka and her husband Scott of Charleston, SC, Laura Stathis of Sinking Spring, PA, Theresa Webb and her husband David Condon of Eden, Md, Raymond Smith, Jr., of Rockaway, NJ, and Thomas Smith and his wife Ruth Ann of Waxhaw, NC. Ray also leaves behind nine grandchildren and four great grandchildren, as well as three nephews and two nieces. He was the ultimate family man who put his wife and children above all else. His family will miss his smile, warm embrace, silly jokes and of course his unending, boundless love.
To plant a tree in memory of Raymond Smith, please visit Tribute Store
Services for Raymond Smith
There are no events scheduled. You can still show your support by planting a tree in memory of Raymond Smith.
Visit the Tribute Store
Share Your Memory of
Raymond
Upload Your Memory View All Memories
Be the first to upload a memory!
Share A Memory
Plant a Tree