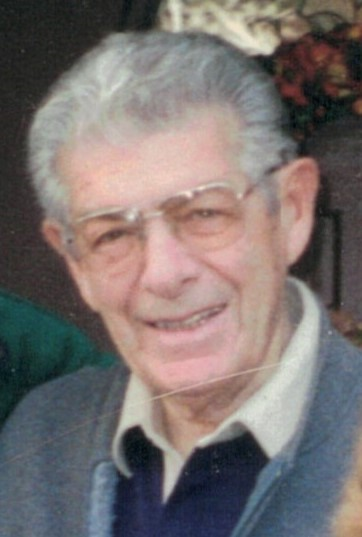 Carlo Lewis Pizzicaroli passed away on April 8, 2020 at his home with his loving wife Chris by his side. Born August 22, 1928 as Carlos Lugui to Mary D’Annibale and Camillo Pizzicaroli. Carlo was an altar boy at St. Joseph’s Catholic Church in Newton, NJ for a number of years. He attended the Newton school system throughout his school years where he then graduated in 1947. Carlo was active in all sports during his school years. He won a basketball scholarship, however, was unable to accept due to family obligations. He joined the US Army and spent 2 years in Japan. After returning home Carlo held various positions before starting his career at Selective Insurance Company. He served Selective Ins. for 37 years before retiring in 1993 as Assistant Vice President. Carlo was a member of the Kittatinny Lions Club for many years. He enjoyed a great card game and a cigar with friends. He was a great sports fan. Carlo liked the Giants, but he Loved the Yankees. His true love was golfing. He lived and breathed golf, until he could no longer physically endure. Carlo enjoyed taking trips to the casino with his dear friend Walter Prigge; however, his greatest pleasure was spending time with his family. Carlo is survived by his wife of 37 years Christine (Babcock), his daughters Carla Conlon of West Palm Beach, FL, and Terry Sparling of Newton, NJ; his sons Richard of Mt. Penn PA, and Kevin Bicskei (Christine) Dingmans Ferry, PA. In addition, he leaves behind 8 grandchildren and 11 great grandchildren. Also, cousins, in-laws, nieces, and nephews He is predeceased by his parents, brother Louis, son-in-law Tim Conlin, loving Aunt Anna D’Annibale, best friend Elmer Herring and in-laws Alice and Robert Babcock. A special thanks to our daughter in-law Chrissy Bicskei for her compassion and loving care that she gave to Carlo at this time of his life. Contributions can be made to a charity of your choice in Carlo’s name. Cremation will take place at the convenience of the family. A “Celebration of Life” service will be announced at a later date on Stroyan Funeral Home’s website. For future services and online condolences, please visit www.stroyanfuneralhome.com. Arrangements by Stroyan Funeral Home, 405 West Harford St., Milford, PA.
Share Your Memory of
Carlo
Upload Your Memory View All Memories
Be the first to upload a memory!
Share A Memory