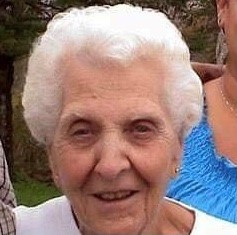 On March 26, 2021 Patricia "Pat" Barber, 95, quietly passed away at home surrounded by family members who loved and provided care for her.

Born to Leo and Margaret (Pieper) Gavoille, Pat and her two older sisters Natalie and Dorothea, grew up in Dingman Township, near Milford, Pike County, Pennsylvania. Because Leo was a horse handler at Camp Log Tavern, a nearby recreational getaway, Pat and her sisters as very young children learned to ride horses and were not at all intimidated by them.

In time, Pat met and married John Sydney "Johnnie" Barber, a Purple Heart recipient for his Army service during World War II. Pat and Johnnie enjoyed a long loving union for 50 plus years until his passing. Like Pat's parents, the Barbers also had three daughters.

Pat worked as a bookkeeper for Delaware Valley School District, Milford, and as a senior buyer for Horton Memorial Hospital in Middletown, N.Y. Pat and Johnnie moved to Cape Cod, which they loved almost as much as their native Pike County.

Selflessness and love of family characterized Pat, who was very involved in helping rear not only her own children, but her grandchildren, her great-grandchildren and her great-great-grandchildren. Rather than being forceful, she quietly influenced her large extended family and made it look effortless. She also possessed a disarmingly dry sense of humor, and could make anyone laugh in spite of themselves.

Pat was predeceased by her beloved husband, her sisters, and her daughter Candy Howard. She was survived by her daughters Patricia Martin and Debra Bailey, both of West Winfield, N.Y., 9 grandchildren, 36 great-grandchildren, and 20 great-great-grandchildren, as well as nephews and cousins. She is deeply missed by family and friends. At the wishes of Pat there will be no services. In lieu of flowers donations can be made to The American Cancer Society or Orange Sullivan Hospice Association.

Share Your Memory of
Patricia
Upload Your Memory View All Memories
Be the first to upload a memory!
Share A Memory