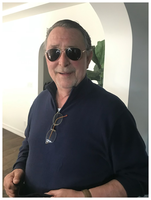 Ronald Eugene Schoenleber, Jr., 76, passed away at home in the company of his children in Milford, PA after a long illness on December 16, 2020. He is survived by his wife Nancy, his children Kristin Noël and Scott, and his sister Kathleen Tarbell. He was born to Ronald and Mildred Schoenleber in the Bronx, NY in 1944. He sang in the choir and was a varsity wrestler at Sanford H. Calhoun High School in Merrick, NY before earning a scholarship to Gettysburg College. At Gettysburg, he was a member of the TKE fraternity, and he maintained friendships with his brothers throughout his life. After graduating with a B.S. in biology in 1966, he attended Officer Candidate School in Newport, RI, and served as a Lieutenant (j.g.) in the Sixth Fleet. During the 1980s, he was an executive for Playtex and moved with his family to Spain and Scotland before settling in Milford in 1987, where he was an Odyssey of the Mind judge for many years and an Election Day poll worker. He worked as an investment advisor with Wells Fargo until his retirement. He was a life-long Yankees fan and a passionate enthusiast of Duke University’s Blue Devils, attending many games for both teams with his son. He also loved music, and he travelled regularly to NYC to see Broadway musicals and Christmas performances of Handel’s “Messiah” with his sister. In 2019, he drove across the country and back in remembrance of a road trip he took with his cousins when he was sixteen. A private observance will be held. The family thanks the many healthcare workers who provided compassionate support to Ron. Memorial donations may be made to Above the Rest Home Care LLC or to Residential Hospice Foundation.